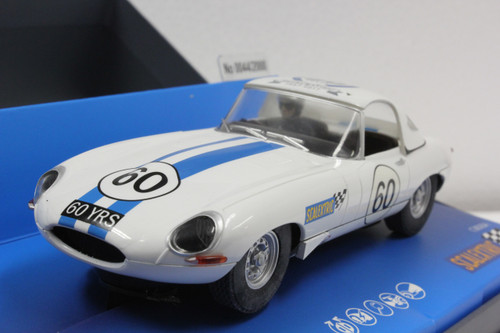 Despite being debuted in the 1950s, it was the 60s that really saw Scalextric come to prominence as one of the best known toys across the globe. With countless new cars, from the Ferrari 250SWB and Jaguar E-type, right down to Go-Karts and the humble Mini; Scalextric had a car for everyone to race at home. Countless accessory buildings and track pieces were added and the range blossomed, with superstars like the Beatles even having a go! But the celebrity endorsements were not limited to pop stars, Jim Clark, Graham Hill and various other racing drivers of the era all had their own Scalextric sets.

No other car symbolizes the swinging sixties quite like the Jaguar E-type, manufactured by Jaguar Cars Ltd between 1961 and 1975 its combination of beauty, high performance and competitive pricing established the marque as an icon of 1960s motoring. On its release Enzo Ferrari called it “The most beautiful car ever made”, the Lightweight was also very successful on track and in smaller races with Graham Hill and Roy Salvadori seeing the top step of the podium in E-types. In Australia Bob Jane won the 1963 Australian GT Championship in an E-type Lightweight and even today it continues to be a force to be reckoned with in classic GT racing around the world.