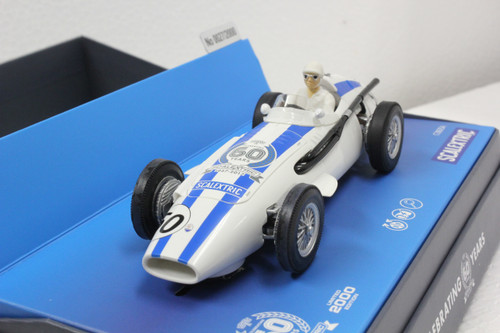 Launched in 1957, Scalextric was the brain child of Bertram ‘Fred’ Francis, the talented inventor behind a range of mechanical tin toys. The first Scalextric cars were tin too and powered by a small electric motor, instead of the more common clockwork cars of the time. This new toy took off and by 1958 Francis had sold his idea to Tri-ang, who looked to invest. Tri-ang produced newer cars in plastic and the range of vehicles offered started to expand.The very first car released by Scalextric in 1957 was the Maserati 250F, then the car to have in Grand Prix racing with Juan Manuel Fangio scoring his legendary final win in one at the 1957 German Grand Prix. In this race he overcome a 48 second deficit in just 22 laps and broke the lap record 10 times in one race. The very first Scalextric set featured two of these cars and perfectly captured both the glamour and beauty of motor racing cars of the period. The 250F was phased out of F1 racing shortly afterwards, but remains one of the most iconic and beautiful F1 cars of all time, a shining testament to the bravery of the early F1 World Championship competitors.