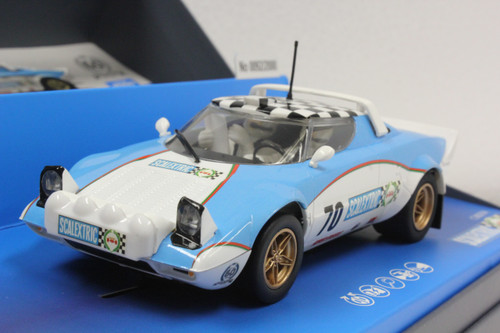 The 1970s saw Scalextric continue to follow the trends of worldwide motorsport with a string of successful cars. F1 World Champions were featured with JPS Lotus cars and a range of Tyrells, as well as the outlandish 6 wheeled P34 Tyrell and March 2-4-0. Lauda’s Ferrari also made an appearance as well as the Brabham BT49. Away from F1 the wild Group 5 era of sports car racing was covered with the BMW CSL as well as Porsche’s whale tailed 911. British classics such as the Triumph TR7 and Mini Clubman also featured in the Scalextric range.

One car not covered by Scalextric in the 1970s, but a poster child of the decade, was the Lancia Stratos HF, widely and more simply known as the Lancia Stratos. The HF stands for High Fidelity and the car proved to be a very successful machine, winning the World Rally Championship in 1974, 1975 and 1976. Overall it took 18 WRC victories between 1974 and 1981 with Sandro Munari taking 7 of them. Other notable winners in the Stratos are Björn Waldegård, Bernard DarNiche and Markku Alén. The wedge shape of the Stratos is classic 1970s, with its mid-mounted Ferrari sourced V6 giving the car a large amount of power to put through its short chassis, which also gave the Stratos some nimble handling as well.